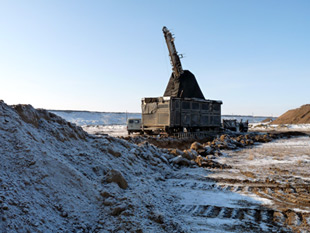 The Company is focussed on developing two deposits of molybdenum, tungsten and copper, at Drozhilovskoye and Smirnovskoe.

The Drozhilovskoye molybdenum-tungsten deposit is located in Denisovski rayon of Kostanayskaya oblast, 55km northeast of Zhitigara and 31km northwest from the rayon center, Denisovka. The small settlement of Okrainka lies some 4km from the deposit. The deposit area covers approximately 6.6km2. In addition to the main valuable ore components of molybdenum (Mo) and tungsten (W)  and Lithium (Li) the deposit is also thought to contain amounts of bismuth, beryl, rubidium, cesium, copper, gold and silver.

Since the deposit was discovered in 1964 considerable exploration work has taken place culminating in the most recent resource statement undertaken in 2005 (using the former Soviet Union resource and reserve classification system common in Central Asia), which provided a GKZ approved Category C1 and C2 resource estimate for the northern stockwork, using a 0.05 per cent. Mo (equiv.) cut-off, of 37.2Mt at 0.107 per cent. Mo and 0.086 per cent. WO3. Importantly, the first resource estimate undertaken in 1974 defined a GKZ approved estimate for the whole deposit at C2 of approximately 140Mt at 0.188 per cent. Mo.

The most recent exploration work on the project was a drilling programme in 2018 which broadly substantiated previous work and provided further detail to both the geology and resource base.

However, there remains substantial upside to increase the deposits tonnage from 37.2Mt based on the 1974 resource estimate. Drozhilovskoye’s updated resource figure is 139.8 million tonnes of ore, including 262,890 tonnes of molybdenum and 64,300 of tungsten.

The Smirnovskoe molybdenum-tungsten-copper deposit is located in Karabalyksky rayon, 156km northwest of Kostanai oblast and some 41km north of Karabalyk, the district centre in northern Kazakhstan. The village of Smirnovka is in the immediate vicinity of the deposit. The deposit area covers approximately 13.7km2.

The deposit has been divided into a larger northern and smaller southern zone, within both zones the principal ore mineral is molybdenite which is associated with chalcopyrite and pyrite. Other minerals are rare.

The deposit has been studied in much less detail than Drozhilovskoye, although a 1996, GKZ approved, resource estimate produced a combined Category C1 and C2 resource for both the larger northern and smaller southern zones of approximately 109Mt at 0.1378 per cent. Mo (equiv.) using a 0.05 per cent. Mo equivalent cut-off grade. A further estimate was provided in 2007 which gave an estimate of 108Mt at 0.1056 per cent. Mo using the same cut-off grade. Smirnovskoye’s updated resource figure is 170.5 million tonnes of ore, including 221,700 tonnes of molybdenum and 17,100 tonnes of tungsten.

The Directors believe that the deposits at both Drozhilovskoye and Smirnovskoe have the potential to become significant molybdenum concentrate producers in the future either as two separate mining and processing facilities or collectively as two mining operations sharing a single processing facility.

Following the Contract Reinstatement, the Company intends, subject to financing, to commence a four stage process aimed at developing the Drozhilovskoye and Smirnovskoe deposits. Whether these deposits are developed together or individually will be determined by their respective exploration and feasibility studies. Success with either or both deposits is expected to be followed over the following two to three years by the completion of a bankable feasibility study (BFS) for a large-scale mining operation producing molybdenum and tungsten concentrates plus potential other by-products. On completion of the BFS, the Company will review its strategic options: whether to finance and build an operating mine or to sell one or more deposits to another mine developer. The Company’s existing financial resources are not sufficient to enable the Company to fulfil its strategy outlined below. The Company will be seeking additional financing. The Assaubayev family intends to support the Company in achieving its strategic aims. The deposits are currently viewed as early stage exploration projects. However, since their discovery a number of exploration programmes have been undertaken with complementary and limited, but encouraging, metallurgical test work.

The Drozhilovskoye deposit has been the subject of 71,561m of drilling completed between 1964 and 2007 over nine successive drilling campaigns. Extensive drilling has also been completed on the Smirnovskoe deposit and, although there is limited existing core available, there is a full record of the duplicates of drill core pulps previously sent for assay for much of this drilling.

In 2005 metallurgical test work was completed on 12 samples from Drozhilovskoye and Smirnovskoe. These preliminary results indicated for the Drozhilovskoye samples that molybdenum recovery was approximately 93 per cent. and the concentrate varied from 50-54 per cent.

Phase 1 was delayed dioring the period of depresed commodity prices.
The recent drilling in 2018, revealing substuntial resources of lithium and the interesed of JV pertners, makes it attractive to move the development of the anex forward. The drilling was conductive in Q1 2018 of Drozhilovskoye.

During Phase 2 the intention will be to gain confidence in the previously stated mineral resource potential. This will be done through a series of infill drill holes as identified ‘gaps’ from the geological model from Phase 1. The exploration programme will apply appropriate geophysics and geochemistry methods to expand the resource potential. The expansion of the resource will be completed by the drilling of new holes in the most prospective areas highlighted by the geophysics and geochemistry.

In parallel, a preliminary economic assessment will be undertaken that will focus on confirming the availability and requirements for the development of the two deposits including power, water, environment, metallurgy, logistics and end user requirements for the molybdenum concentrate. It will also include a detailed assessment of the demand/supply balance of molybdenum and future forecast pricing.

A JORC (or equivalent standard, as defined by the AIM Rules) compliant resource statement will be completed and used as part of the preliminary economic assessment as the first step of determining the potential financial attractiveness of the project.

The outcome of Phase 2 will determine the potential of one or both deposits, when in production, to achieve the economic hurdles justifying a pre-feasibility study (PFS).

The completion of Phase 2 will also define the objectives for the PFS. The PFS will consider all the mine development options and determine the most appropriate option to pursue in the BFS.

In Phase 2, all the environmental and social impact studies to fulfil the requirements to advance the Drozhilovskoye and Smirnovskoe deposits from exploration to mining will commence. These studies and subsequent management plans are intended to fulfil the Government’s licensing requirements, which will enable the Company to apply to the Kazakh government for the issue of the related licences and permits to build and operate a mine.

Drilling should continue to upgrade the deposits from inferred resources to an appropriate level of measured, indicated and inferred resources, with a portion being upgraded into proven and probable mining reserves.

The PFS, undertaken by Project XXI, confirms that the Drozhilovskoye and Smirnovskoye projects are technically and financially viable and more economically robust than initially estimated.

The results of the PFS, in relation to the financial outcomes of a single development plan will be in light of the re-assessed in the light of the current drilling result. In addition, the JORC (or equivalent standard, as defined by the AIM Rules) compliant reserve and resource statement will be updated and supported by a revised geological model.


As stated above, resource estimates have been revised upwards:

The two projects have robust estimated economics with a combined NPV of US$1.55 billion, applying a 9% discount rate adjusted for inflation. Capital expenditure is estimated at $267.4 million for both projects, based on the purchase of new equipment and $10 million contingency. Highly competitive capital and operating costs enable the Company to generate positive returns and free cash flow, with the break-even cost estimated at $10,000 per tonne for molybdenum and tungsten concentrates.

The timing of the definitive feasability study (DFS) is to be decided at a late stage once the drilling results have bee analysed.

In conjuction with the DFS a pilot plant in to be developed to test production and extraction techniques.

During the preparation of the BFS, the objective will be to provide investors and financiers with the confidence to fund the development through to production using both equity and debt financing. The BFS will be prepared taking account of the Equator Principles used by the financial community as a bench mark to provide financing for mining developments in developing nations.

During this phase, work should progress sufficiently with design, engineering and contracts so that, upon funding being obtained, the construction phase can commence quickly and contracts be entered into with contractors.

A mine development plan used for the BFS will be based on the updated reserve and resource statement and supporting geological model.

In addition, it is intended that, prior to the completion of the BFS, all regulatory approvals, permits and licences will be secured, and result of the pilot plant